This past weekend Gwangju had a “Pink Ribbon Love Marathon” to raise money for breast cancer. Which I think is pretty cool that they do that here too, it just makes you think how countries can be so different in many ways but there are certain things that we can all relate to, and it’s a comforting feeling to know we do the same exact thing in America and probably in lots of other countries.

On Saturday morning at 8:30 we made our way down to the Gwangju World Cup stadium. (Which is still a mystery to me why the taxi drivers have a hard time understanding us when we say it…because it’s the same in Korean) We arrive at the stadium and wonder around the tents for a while getting stopped a few times with people asking “May I take a picture of/with you?” “Sure” I say, as in a few months I won’t be treated like a celebrity anymore. Erica, Whitney, and I also got free shampoo samples for taking a picture with giant shampoo character bottles. Still not sure if that’s normal or not, I’m starting to forget what is normal and what things I’m just used to now. I was walking home from work the other day and I saw an old man on a moped smoking a cigarette. I kept walking thinking nothing of it, and then I looked at Whitney and said “Do old men smoke cigarettes while riding mopeds at home? “ I don’t know.. I know they definitely don’t ride mopeds on the sidewalks back home.

Anyways, we met up with some of our other foreign and Korean coworkers, did some group stretching, watched a mini Korean rap concert and started preparing for the run. That was until the MC announced something in Korean making literally the whole crowd stop in their tracks, scream and run up to the stage. While all the foreigners stood around having no idea what was happening. Little did we know “the most handsome man in Korea” was in Gwangju on the stage in front of us. Yes, that is his title, and that’s the only reason he is famous. Apparently he recently married the “most beautiful woman in Korea”.

After all of the commotion it was time to start the run. Erica and I were the only ones signed up for the 5K, everyone else was doing the 10K. I’m not a big fan of running and I thought the 5K would be enough of a challenge. Well, we lined up with all the other 5Kers, and somewhere between lining up and the fireworks signaling the start we somehow got on the 10K course, and we didn’t figure it out until we got to the “half-way mark” which was what we thought was the finish line. As I was running up to the big 5K sign, I was feeling really good and proud of myself for running pretty much the entire way. All that excitement about finishing went down the drain when I realized why people were looping around and still running. I was confused and waited for Erica who was right behind me, we were so upset that we went on the wrong course that we decided just to walk the rest of the way back. What made us more angry was when the police man came up behind us on his motorcycle and told us “hurry up, you’re last!” Everyone we past kept cheering us on and saying “cheer up you can do it!” and “fighting!” We would try to explain that we went the wrong way or as Erica kept saying “We fucked up”. Making them tilt their heads like dogs trying to understand. At one point I was trying to ask the volunteer water boys if there was a shortcut and that we were supposed to be running the 5K as I held up my hand gesturing 5K, the boy thought I was giving him a high five…not comprehending anything I was saying. We could only just laugh it off and continue our long walk back to the finish line. The taxi driver we hailed also probably thought we were pretty ridiculous and lazy, and declined us for reasons unknown. We eventually made it and got our banana and pink medal.

Have you ever come in dead last for a marathon? I have. 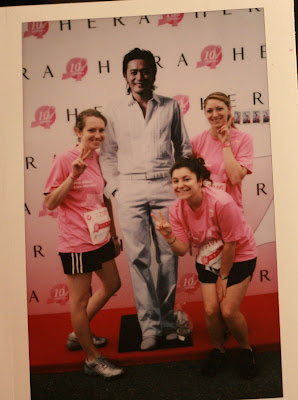 Cardboard cut-out of the "most handsome man in Korea"

Who we later saw in person.