Since I’ve been in Korea, I’ve wanted to do this thing called a temple stay. It’s where you go to a temple for a weekend and learn about Buddhism and see firsthand how the monks live. So last week Jay, one of the Korean teachers helped us get a reservation and book a night for the temple stay. She originally was going to go with us, but something came up, so it was just Erica, Steve, and me. We started mid morning with the usual meet at ECC plan. We took a taxi to the bus terminal and after a little confusion with town names we finally got the right tickets and got on a bus to “Buan” not to be confused with “Muan”. After about an hour bus ride we arrived in Buan, and since we running a little late, instead of trying to figure out the city bus schedule to the temple we decided to just pay the couple extra won and jump in a taxi.
We eventually made it to the temple, arriving a little late, but we only missed the “orientation” which was all in Korean anyways. Lucky for us there were two Korean girls that spoke English, also attending the temple stay. So she helped us get dressed in our “monk” outfit and helped us get our little gummy shoes. We were then taken to our little “huts” and told us dinner would be at 5. Steve was taken to another hut with 2 other guys. Dinner wasn’t too bad, typical Korean food… 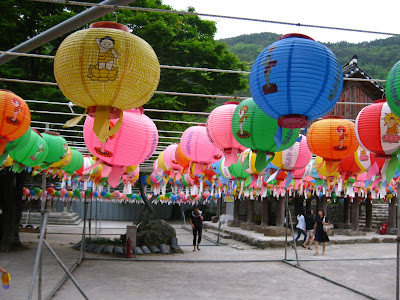 After dinner we had “tea time”. It was a traditional Korean tea ceremony with the monk. We all sat on the floor gathered around this little table and as the monk was setting up and making the green tea, we were told to ask him any questions we had. He spoke no English, but our friends were nice enough to translate some interesting things he was saying. Such as how monks believe in a second life, so there is no need to rush through life and figure everything out, and a few other interesting beliefs. I’m sure it would have been a more interesting discussion if it was in a language I could understand. But it was really cool, non the less. I asked him why monks shave their heads, which was probably irrevelent to the conversation, but I wanted to know, and that was the only question I could think of at the time. He said it was something about one of the pains they have and something about rebirth each day or something…I don’t know the translation was kind of confusing. He had a good sense of humor though, he made fun of us a few times, being the only foreigners, and at one point when discussing our ages he asked me to marry him. Good times. 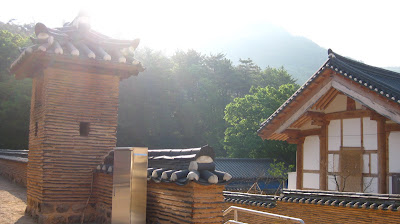 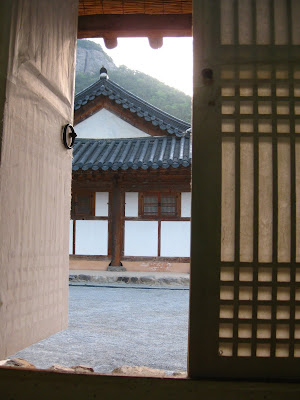 So after downing about 12 cups of green tea, we headed back to our huts and called it an early night, considering we had to be up the next morning at 3:30am. Well 3:30 turned into 4:00 for me in Erica, since our temple stay helper man didn’t wake us up as he promised. We quickly rolled off the floor and got in line to go to the temple. We took our spots in front of Buddha (or the 3 Buddha’s I should say-past, present, and future) and started the bows. It was a pretty surreal experience, with the monks doing their chant and banging their drums. It was still dark outside and I was still half asleep, so it almost felt like a dream. The bowing was definitely harder than I expected. It was the full bows from standing - to your knees – to your head on the floor. Then back up, and then down again…and so on. I’m not sure how many we did, but we later did 108 bows, which wasn’t too bad. I actually enjoyed it, because it was slower and it was very relaxing. (The 108 bows stands for something, but don’t ask me, because I don’t know) 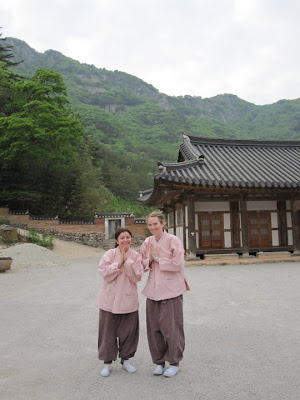 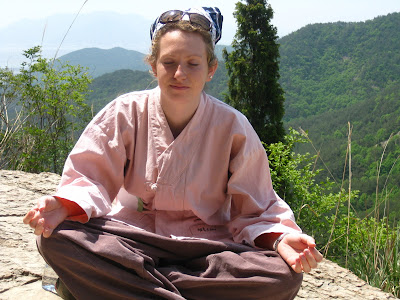 Anyways, after all the bowing it was finally time for breakfast. Little did I know would be the worst breakfast in my life. So we get our bowls and silverware and everything, and we take our spots on the mats on the floor. The monk was there and he was going to show us the traditional way to eat breakfast. We did this whole rinsing of the bowls thing first, which was just swishing water around in one bowl and then pouring it into another bowl and so on. He picked some volunteers to help serve the food, obviously not us because we were clueless. Lucky for us we got to serve ourselves the rice as she came around with the pot, and also the seaweed soup and kimchi and the other mesh. This was good, because Korean culture (and especially Buddhism) you have to finish everything on your plate, no exceptions.

The rice and kimchi was no breakfast burrito, but I ate it. When everyone was finished someone came around and poured water in our bowls to clean them out. We were supposed to grab a radish to use as a sponge to rub off the leftover rice on our bowls, but I didn’t get one and the man next to Erica forced her to get one, but she ate it not knowing that we were supposed to save it. So after rubbing the bowl with my fingers and swishing the water from bowl to bowl again (we had 4 bowls) another person came around to collect the water in the pot. NO food though, we were supposed eat the remainder rice kernels. When the girl brought the pot of water up to the monk, he looked in it and saw one tiny piece of food floating in it and told her to give back the water. So that big pot of community dirty water was then distributed back into our bowls and yes, we had to drink it.
After gagging that down, the more difficult task was getting up from sitting Indian style for 2 hours. I never thought my legs could hurt so much from just sitting. Once breakfast was over we helped clean the floor and clean the dishes and then filled our water bottles to prepare for “trekking”. We all piled in a small little van and they brought us around the mountain to a part where we could hike up and then we could just hike back to our temple. 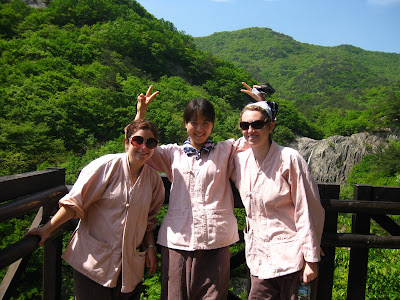 The hike was fun. It was a little too hot to be wearing our long sleeve outfits, but other than that it was really nice. Everything was so green and we stopped at some really beautiful spots with lakes in between the mountains and also a really pretty waterfall. 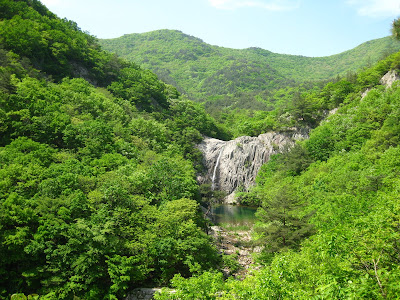 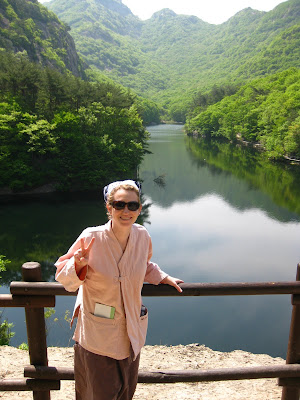 All in all it was a really great weekend and it was probably the best thing I’ve done since I’ve been here. It wasn’t touristy and it was so authentic and traditional, it was just an awesome experience. 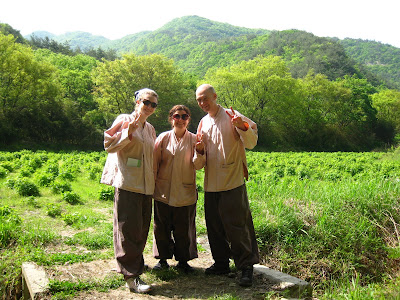