Last week our school had 2 days of Kinder Open Classes. This is where the parents get to come into the class and observe as you teach their students a “typical” everyday lesson. Except, for the fact it’s nothing like how a typical class goes. These parents pay a lot of money for their kids to go to this English school so they expect a lot, therefore we were put under a lot of pressure to uphold a high standard of teaching. We picked a lesson and made a lesson plan, which was turned in to our boss for approval and any critiques. We practiced the same lesson with the kids for about a month and were even told to give the kids scripts, so they can memorize what to say during the lesson. ..so is it a real lesson I’m teaching or just a play put on for the parents? Either way I don’t think anything could be more nerve racking then standing in front of all my student’s parents and teaching a lesson, making sure to call on all the students equally, and trying to remember my “lines” of the script.

After teaching each of my 3 open classes there was a meeting with the parents. My Korean partner teacher, who also teaches their kids everyday goes in the meeting with me and discusses what they thought of the open class and any other topics, while all along I’m just sitting there, looking pretty since I can’t speak Korean. Talk about awkward, especially when I hear “blah..blah..blah..Caroline-teacher…blah..blah”. I think most of the parents like me for the most part, but who knows.

To relieve all the stress of that week, Whitney and I made our way up to Seoul for a weekend dedicated to just shopping. We hit all the markets and shopping malls to pick up all the Korean stuff we wanted to get before leaving Korea. We returned to Gwangju with our backpacks/duffle bags jammed packed with gifts and knick knacks to bring home.

After getting home around 10'o clock we quickly dropped off all of our purchases, threw on our Korean soccer gear and jumped in a taxi to go to the world cup stadium to watch the world cup game. Korea vs. Uruguay. Beer, chicken, and a stadium full of screaming fans made it feel like I was actually at the game. They played the game on the big screens and had everything you would have at an actual game, even cheerleaders. It was a good time, even though Korea lost. I went home and tried to stay awake for the USA game which was playing at 3:30am, but ended up just crashing on the couch from such a long day. 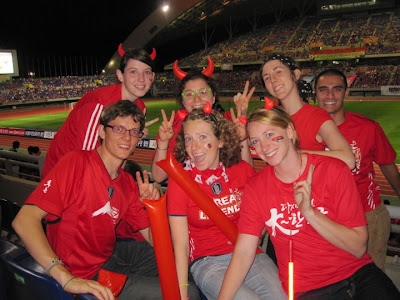