When I first came over here, I was definitely dreading the winter. Coming from Florida, and not even owning a winter coat, I knew it was going to be a cold winter. The one thing I was looking forward to was skiing. I love to ski, and I was really excited about going. The first time I went was back in November, and I went with Whitney, Erica, Jason, and 3 of the Korean teachers (which was good because they helped us with the bus, ski rental, and everything). We got up at 5am and met everyone in front of Dunkin Donuts to catch the bus. About 2 hours later we made it to Muju. There was not a lot of snow on the ground, but the slopes were fine thanks to the artificial stuff. We all got our skis and snowboards and were ready to hit the slopes. Unfortunately, everyone in Korea thought it was a good day to go skiing too. There were so many people, or I should say there were so many snowboarders. I would say the ratio of snowboarders to skiers was probably 80-20. That made it a little uncomfortable going down the slopes and hearing the snowboarders buzzing by on both sides, I almost got ran into many times. The ski lifts all had really long lines. We waited about 40 minutes in the longest line. The best thing about the ski lifts was the guy standing at the end of the lift, when it was time to get off. He would bow at everyone getting off. I mean, I know it’s a normal thing here, but man that must get pretty annoying to bow every 7 seconds. 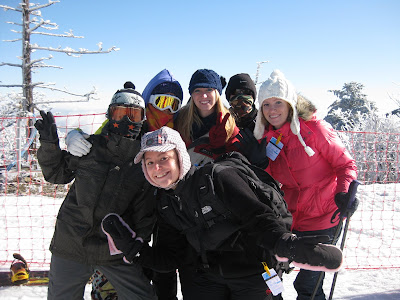 After about only 3 runs (because we waited so long in the lines) it was time for lunch. They don’t have lodges here with cozy fireplaces, instead they just have a cafeteria that serves lots of kimchi and rice. Luckily there also have a Popeyes there too! So, greasy fried chicken and french fries it was for me. After a few more times down the slopes it was time to head back to the bus and back to Gwangju. 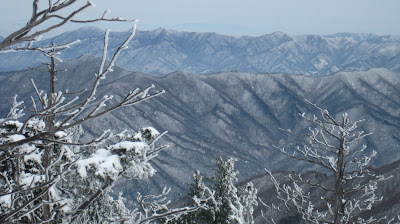 I went skiing another time in January, and then again this past weekend. We had a 4 day vacation for the Lunar New Year. So we decided to spend 2 of those days in Muju; Me, Whitney, Jake, Devon, and the new teachers Matt and Melissa. It was a lot of fun and we were pleasantly surprised to see the slopes practically empty! Totally opposite from the past 2 times I went. The Lunar New Year is such a big family holiday for Koreans, that everyone was at home and not on the slopes. It was fantastic. No lines, no crazy snowboarders, and no fog. It was a really clear and we could see all the mountains. We stayed at a hostel in the ski resort, which was literally just a room with blankets, a fridge, and a TV: no beds. On the down side the floor was hard and it was a small room for all of us, but on the up side the floors were heated, so it was nice and warm. It was a good weekend, and hopefully I can go skiing again before the winter is over. 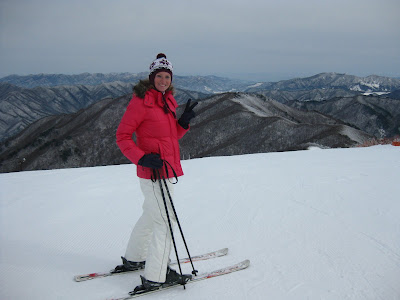