Last month I got the opportunity to go to a Korean wedding. One of the Korean teachers at my school was getting married. I was expecting to see a traditional Korean style wedding, but it was actually more western style. The ceremony was held in a place called “Marriot Wedding”, which is apparently where many weddings take place. When we arrived there, we didn’t really know where to go, luckily some of the other teachers got there at the same time. We followed them into this little room, and the bride was in there – just sitting there – with everyone taking pictures around her. It was very different; because it seemed like that should have just been a room for family and a few close friends to come in. It’s a great idea though, because she didn’t have to move, and anyone who wanted to see her and take a picture with her had the opportunity to do so. And oddly enough they even brought the groom in there to take pictures before the ceremony. 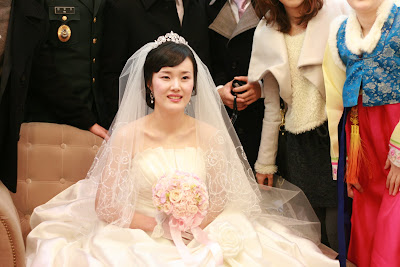 After everyone got their pictures, it was time for the ceremony to start. We took our seats in the nicely decorated wedding hall and got our cameras ready. The mothers were both wearing Hanboks (traditional Korean dress) but other than that, the bride was wearing a dress and the groom was wearing a tux. From there on everything was pretty much the same, the bride walked down the aisle with her father. Then the priest started talking for a long time. There were a lot of camera men, and they didn’t hesitate to get a good picture, they just got right up there and snapped away in their faces. When the priest finished talking they went to both parents and bowed, then another one of the bride’s friends, also a Korean teacher at my school sang a song. The weirdest thing was that as the ceremony was going on there were a whole bunch of people in the back, in the foyer near the entrance, just talking away, almost to the point where I couldn’t hear the priest (not like I could understand what he was saying anyway). Come to find out that all those people were waiting for the next wedding to start, because as soon as her wedding was finished another bride was already lining up with her father ready to walk down the aisle. Koreans don’t waste time. 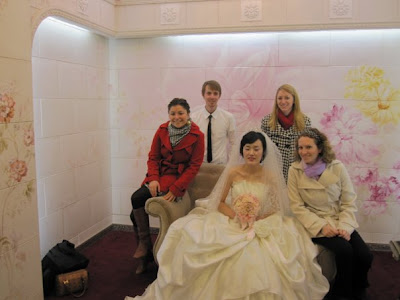 Once the ceremony was over, there was buffet. Sort of like a reception, but without the dancing, cake cutting, etc. The food was really good! There was a lot of it too. The bride came to the buffet dressed in her Hanbok.
Ok, so changing the subject to food. Which to say the least is always interesting. I never considered myself a picky eater, but back home I never really ate spicy food or fish or anything that didn’t look appetizing. But living here has changed my “view” on different foods. I usually try everything now and eat things I probably never would have tried back home. You really cannot be a picky eater here, you could but you would starve. So to sound cliché, I’ve definitely broadened my horizons, food wise. There’s been many time where I’ve eaten things, and had no clue of what it was, which brings me to last weekend.
It was a pretty lazy and relaxing weekend. Did a little shopping downtown, and hung around the apartment. On Sunday Whitney, Erica, and I decided to go out for lunch, since we weren’t doing much and well it’s cheap to go out to eat. We wanted to try something new, so we went to this one restaurant which we’ve seen before, that looked pretty good. We walked in, sat down and did the usual language barrier sign language. The menu was all in Korean of course, but we usually can read something and figure out what it is, but this time none of the characters looked familiar. So we basically just pointed to something that looked good and hoped for the best. It was a barbeque place, so there was a grill on our table for us to cook it. Our waitress brought out our “mystery meat” and we all kind of looked at with confusion, and I guess the waitress caught on and decided that she needed to cook it for us, since we looked hopeless. As she put it on the grill, our big American eyes got even bigger when we saw the “mystery meat” curl up on the sides, looking like sausage. It smelt good, and was apparently not sausage because our waitress said “no sausage”. We kept asking her what it was, but she didn’t really speak any English, so she just smiled and nodded.
When it was finished cooking, we were a little hesitant at first, but went ahead and tried it. It didn’t taste too bad. The texture was a little strange, but with it seasoned and barbequed, I thought it tasted pretty good. The texture was very fatty. Erica kept saying it was just pure fat we were eating, but the waitress caught on to that word and said “no fat”. So we sat there eating this “meat” and had no idea what it was. Before we left the restaurant we took a picture of the meat and the menu to take to school and ask one of the Korean teachers what it was. Come to find out the next day that what we had eaten was…… pig intestines.
Awesome. 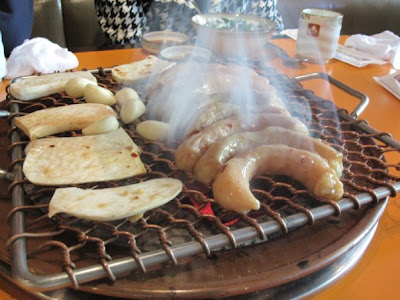 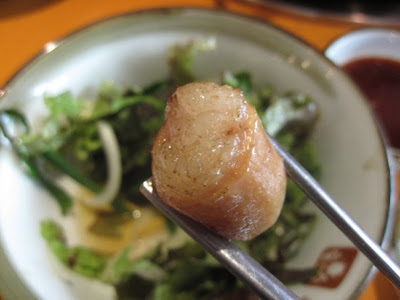 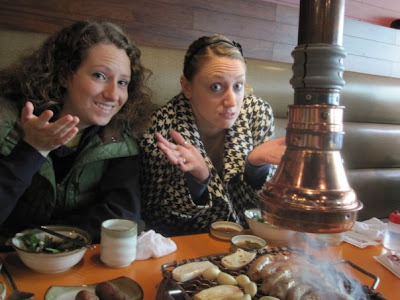