This is not a drill. 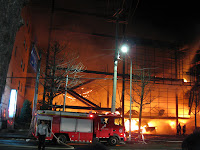 Last Friday was just a regular day. I was happy to be teaching my last class of the day – my 5:40 class. A class full of loud 4th grade boys. It was about 6:05, 15 minutes until the end of class, and strangely enough they were all quiet while we were reading our storybook. That was when a very, VERY faint sound of a fire alarm went off. My kids still all jumped out of their chairs, ran to the window, and started screaming “Teacher..fire!” I went over to the window expecting to see a small bonfire or something. Nope. Instead I saw the brightest orange glow I’ve ever seen, along with big pieces of fire embers flying in the wind. I couldn’t see the fire and I wasn’t sure where it was, but I knew it was big. I told my kids to grab their shoes and their backpacks and lineup. That was when I panicked a little bit, I had no idea where I was going to take them. So I stood there for a second and looked out the door to see if any of the other classes were leaving. I saw one teacher leave her classroom and run down the hallway, I waited to see what she was going to do. She came running back and told me the building next door was on fire, I turned back to my panicked kids and tried to calm them down, telling them that our school was not on fire, just the other building. I took my kids quickly down the hallway and down the stairs. We were on the fifth floor and there are windows all along the staircase facing the burning building. That is when I realized exactly how big the fire was. Never in my life had I seen flames that big. I got to the second floor, where our lobby is, and Whitney was at the bottom holding my stuff. I get my kids in the lobby, trying to keep them all together, in the chaos of all the other classes coming in. I saw the other teachers getting their coats and etc. So I quickly grabbed my coat – didn’t think to get my shoes though (We wear slippers in school).

As I was getting my coat on, the Korean teachers are running everywhere and the secretary is trying to scream into a megaphone that doesn’t work. Then finally my boss screams over all the noise, telling the kids to be quiet, and continues to tell them what do. Which didn’t help me, since everything she was saying was in Korean. She apparently told the kids to put their arm over their mouth and to start heading out. A few kids went downstairs and out the door, but came running back up due to all the falling embers from the fire. That’s when a firefighter came halfway up and told everyone to start getting out. We went down the stairs and began running down the sidewalk, there was no way to keep all the kids together. I was holding the hands of two of my girls and just following the other kids and teachers. The wind was blowing in the direction we were going, so all of the ashes and embers were falling down on us. One fell on my coat and luckily Whitney was running beside me and screamed “Caroline there’s fire on you!” and patted it off. There was one point where we thought we went far enough away and stopped, just to look up and see more coming, so we kept going. My kids were crying, at least the ones I still had with me and other kids were slipping on the snowy/icy sidewalk. Once we got far enough the buses came and they started putting kids on. I stayed with one of my girls for a long time because she was waiting for her mom to come pick her up. Once all the kids were on buses and/or picked up some of the teachers went back to look at the fire and take some pictures.
The building next door was empty and I guess they were beginning to tear it down. We think the fire may have started from electrical wires. Apparently over 100 firefighters came and about 50 fire trucks came to and from the fire. At some point when the fire trucks first arrived, they ran the hose across the street, without blocking off traffic first and a bus drove over the hose, busting it open. Luckily our school didn’t catch on fire and no one was hurt. It was definitely a scary experience, leaving many of the kids and the Korean teachers balling their eyes out.
We went back the next morning to check out the damage and help clean up. Our school didn’t have too much damage. Some of the windows broke and one of the rooms has holes in the ceiling from firefighters having to drain water out. 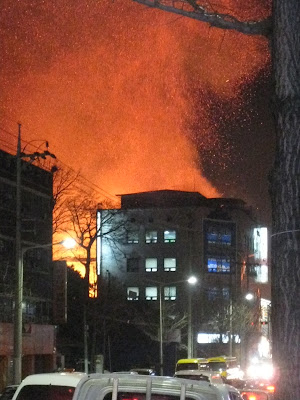