Friday was Halloween. And even though Koreans don’t celebrate the holiday – they celebrate in the English Hogwans. We were supposed to go to a park with the Kinders and have a whole show with the kids singing and dancing and their parents were going to come, but it got canceled due to the swine flu. Yea…Korea is very paranoid of it and lately even the kids have been wearing surgical masks to school. So instead we just did the whole show upstairs in the activity room and their parents didn’t come. It was fun anyways. The kids all dressed up. The boys were superheros, wizards, vampires, etc..and the girls were either angels, fairies, or princesses. All the teachers dressed up too of course. The Kinder teachers all decided to be crayons! And Jason just wanted to be a box, but we made him be the crayon box. They were pretty much the best costumes ever! :) 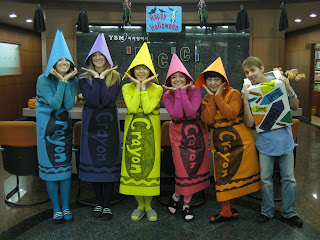 So we started the day with face painting, which was interesting, since I’m not the best artist. Then we took all the kinder kids upstairs and they did their class dance. After that we had to do 2 dances with the kids. One was “You are my Sunshine”, and then the other was a Korean superman song…which was a hard dance, but so much fun - we practiced it, so we wouldn’t look like total idiots. After that we had lunch and then it was time for trick or treating! We had a huge box of candy and they just had all the kids line up – one class at a time and say trick or treat and they had little Halloween baskets for us to put the candy in. Once all the candy was passed out the kids went back upstairs to watch a movie…and all the foreign teachers came up and we took a million pictures. By the end of the day I was exhausted..plus I was getting sick, so I felt horrible. It was a fun day though. 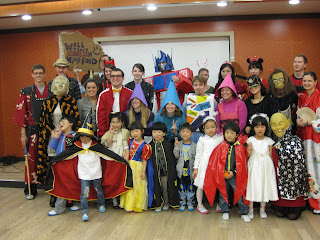 This weekend I didn’t too much, because I’ve been sick, just layed around and such. I listened to the Yankee game this morning then I went to the Kimchi fevstival with Whitney, Erica, and Jason. I wasn’t expecting it to be that great, because well I’m not a huge fan of kimchi. It was a lot of fun though! I had a great time. The taxi ride over there was pretty fun in itself. It was a white and pink taxi, and we got in it and I felt like I was in cash cab. It was so colorful. It had pink felt on the sides and on the roof it had red cushioning. On the dash he had a lot of decorations - a few of those solar powered flowers that move and a spiderman suctioned on the windshield. We were taking pictures and he just laughed, and then gave us some coffee flavored gum.

Anyways, at the kimchi festival they had a free bicycle rental place – so we decided to rent bikes and rode around for a while. Erica didn’t know how to ride a bike, so we taught her how, and she picked it up pretty fast. After bike riding we found a tent that said “Foreigners making Kimchi” and we couldn’t pass up making our own kimchi, even though we weren’t going to eat it. So we went in and they first showed us all the ingredients and what goes into it...I couldn’t tell you what all of it was. After that they demonstrated how to do it. Then they took us to a table, gave us aprons, gloves and the materials and let us at it. Well a guy kind of helped us a little bit. All we really did was just spread all the spicy stuff on the cabbage. It was a lot of fun.

Once we made our kimchi, we went around to the different booths. They had lots of different types of kimchi..I only tasted a few of them, and was force fed some black salty thing. There were a few other exhibits we went to, including a kimchi art place and the history of kimchi. And apparently Gwangju (my city) is known for making the best kimchi in Korea. :) 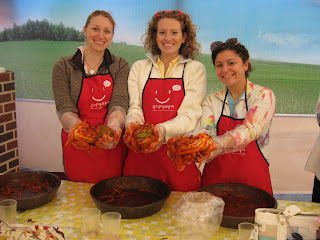