4 months…so far so good. I can’t believe I’ve been here for 4 months. This year is going to fly by. I’m still really enjoying it here. I love the kids. And I just love teaching them – and hearing what they have to say and trying to interpret what they are trying to say. The young kinder kids are pretty funny, because when they don’t know how to say something in English (which is most of the time) they act it out – and say a few words they know. So it’s kind of like playing charades with them, which just cracks me up. They can understand a lot of what I say, it’s just hard for them to think of how to say stuff. The kinder kids are really good at repeating whatever I say too, so it’s fun to teach them new things :)

It’s gotten really cold over here, a lot different from Florida weather. I’m not a big fan of it, but I have found a new obsession: scarves. I’ve never really been able to wear scarves in Florida because it doesn’t get that cold. But I wear one every day here. They’re pretty cheap too, so it’s okay. I’m really excited about going skiing too. I haven’t been in a long time. I’m gonna try and go all the time while I’m here, and maybe even learn how to snowboard. :)

Two weekends ago my sister Jennifer was in Seoul for work. So I went up there and visited her. It was really good to see her. I stayed with her at her hotel, which was super nice. It felt great to sleep in a soft bed with real pillows and a nice down comforter. :) We had a good time. Friday we went shopping in Itawon (a big shopping area right outside the military base). Jennifer got a suit made, and also some custom made boots. And then she talked to me into getting a pair of custom made boots too. Since the only winter shoes I have are my tennis shoes. That evening we went up to the Seoul tower – and saw the whole city. On Saturday we went to a palace and saw the changing of the guard, which was really neat. We also got to dress up in Hanboks (the Korean traditional dress). After the palace we walked around Seoul a little and then went to another shopping area. That night we went to the Korea House and had dinner and a show. The show was really good. It was just like a little theater with lots of different traditional Korean dances and performances. There was one really cool act with 5 girls playing these drums with a synchronized dance along with it. Sunday we did yet again more shopping at the Namdemoon market, which is an outdoor market where you can buy things for really cheap. This is where they sell lots of name brand purses and anything else you could ever think of. After shopping I said bye and got on a bus back to Gwangju. 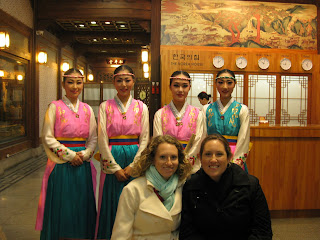 Korea House after the show 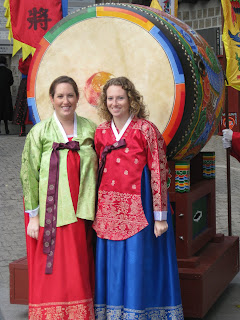 Hanbok wearing at the Palace

Last weekend was good, didn’t do too much. I went and saw the movie 2012 with some of the other teachers. I liked it. I thought it was really good, the plot was kind of cheesy, but the special effects were really cool. This weekend we are having a Thanksgiving dinner. We don't have ovens in our apartments, so we'll have to see how that all works out. And no turkey here, I guess chicken will have to do.

A few quotes from my kids:

Me: “Do you like tangerines?”
Student: “Teacher what is tangerine?”
Other student: “Oranges little friend!”

Student: “Can we play that one game again with the points?...it’s name is..uh..Japanese”
Me: “You mean Jeopardy?” 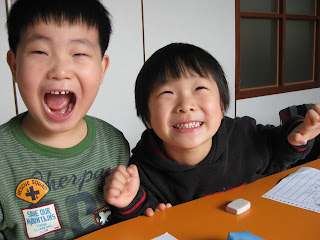 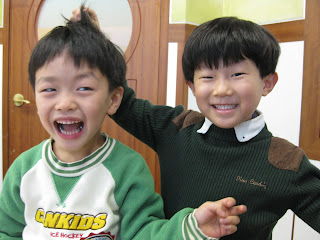