So, last week I had a 5 day vacation for Chuseok, which is like the Korean Thanksgiving. Whitney, Katelyn, Prairie and I all went to Beijing, China.
We left on Thursday morning, at like 4 am, so we would have enough time to catch a taxi to the bus terminal and then take a 4 hour bus ride up to the airport. We got there in plenty of time and sat around in the airport for quite a while, we actually ran into some of the other teachers at our school who were on their way to Japan. We got on our plane and made it to China, even after sitting on the runway for an hour. The flight itself was only about an hour and a half. Once we got to Beijing their friend Alan was there to pick us up. He is also an English teacher in Korea, but he is from Beijing. And he was already there on vacation. (He was such a great help, from driving us places, to giving us translations, and ordering food for us:)) From there he drove us to our hostel and we quickly checked in and put our stuff down, and then we drove to Katelyn and Prairie’s hotel. (by the way our hostel was only $9 a night..and it was actually pretty nice, complete with a little restaurant that even had western style food :) After all that we went to this little art deco street and walked around for a while. Then we went to the lake, which is just a nice little area with bars, restaurants and shops all around a lake. We found a little place to eat dinner on the lake, and I had real Chinese sweet and sour chicken. It was served with fresh fruit around it. It was so good :) 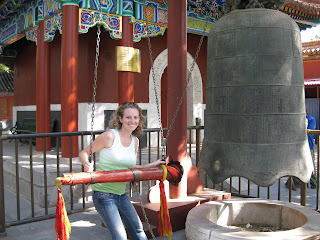 On Friday we hiked the Great Wall. I mean..really hiked it. We woke up pretty early and Alan drove us out there. It took a while to get there, because we went to a non-touristy place. When we got there Alan dropped us off and left us with this old Chinese man and his little van. Both him and Katelyn went and hung out and were going to meet us at a section of the Great Wall. So Whitney, Prairie, and I got in the back of this man’s rickety van and he drove us up to the part where we could start hiking. He said it would take us 3 hours..but with breaks in between and taking a bazillion pictures it ended up taking 4 and half hours. The weather was absolutely perfect. It could not have been a better day. And I cannot put into words how incredible the Great Wall was. Even all the pictures I took can’t compare to actually being there and seeing it. The mountains were beautiful and where we were, there weren’t many people so it was really peaceful…and just surreal. It was a lot more exhausting then I thought it was going to be. Climbing up and down the wall..and a lot of parts were super steep with nothing to hang on to. There were also some parts of the wall that were deteriorating, so the rocks were all unsteady and crumbling. We eventually met up with Alan and Katelyn and we had to walk across this shaky suspension bridge. We got a drink, chatted for a little while and then we decided to hed home. So there are many different ways you can get down the Great Wall…you can just walk down, take a cable car, do this little bob sled thing, or zip line. We opted to do the zip line. This was a little scary at first (especially since the guy just threw a harness on us hooked us on and pushed us down)...but it was so much fun. 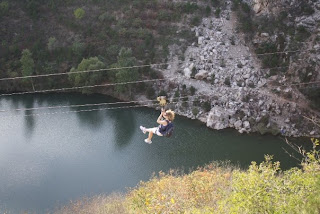 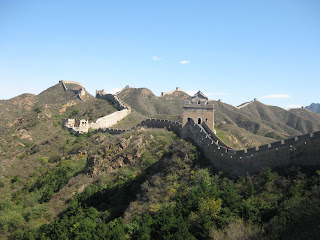 That night we went to the Silk Market, which was an experience in itself. It’s this huge 7 story place where there are thousands of vendors. They sell EVERYTHING there, from coats to book bags to shoes, purses, silk scarves, jewelry, etc. This is one of the most famous places for bargaining. The vendor people speak really good English and they all want your business. Therefore they will do anything to get you to buy something from them. They will get right in your face and beg you to come into their spot and try to convince you that you need something. They will literally grab your arm and pull you into their little area. They are all pretty nice and very funny..but also very pushy. It was such a fun place though…and bargaining with them was really fun. They would punch in some ridiculous price on their calculator and then you would have to go way down like to half of what they said…and bargain from there. They would say some funny things like “Oh no..I cannot do that price, when you come back tomorrow you will not see me because my boss will kill me”. It was also kind of hard trying to convert in my head. Because I was converting Chinese Yuan into Korean won and then Korean won into US dollars. I bought a lot more then I wanted to buy there, but they had so much stuff and it was so cheap. I was really happy that I got a winter coat there. Also 2 purses, a silk scarf..and some other random souvenirs.

On Saturday, Katelyn, Prairie, and Alan went to Shanghai, because they had been to Beijing before. So Whitney and I were off to do more sightseeing. We decided to go to the Forbidden City. What we didn’t know was that everyone in China decided to go as well. Thursday was the 60th anniversary of the People’s Republic of China, so I think a lot of people were in the city for that big celebration and decided to stay in town and make Beijing even more crowded than it already is. So anyways, that morning we found the subway and were in amazement by how many people were there. It was so incredibly crowded that we were literally shoved on the subway by the subway police. They had to push people on and hold them in as the doors closed. It was crazy. 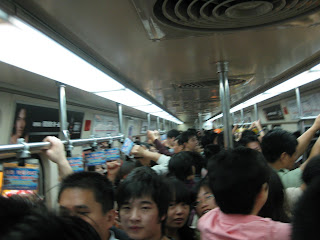 Once we got to the Forbidden City. We grabbed a quick breakfast at McDonalds and then just followed the herd of people. Again it was a beautiful day, which was another reason so many people were there. As we were walking there we got stopped several times by Chinese people asking if they could take a picture with them. At first we were both like “haha ok”. But then when we actually got to the Forbidden City and started taking our own pictures, even more people asked to take our picture. EVERYBODY wanted to take a picture with us…it was like we were celebrities, which I guess we were in their eyes, since we both have blonde hair and blue eyes. I could not tell you how many pictures we are in…I would guess about 40 or so. The Forbidden City was really pretty. Lots of really neat Chinese architecture and….well it was just really cool. 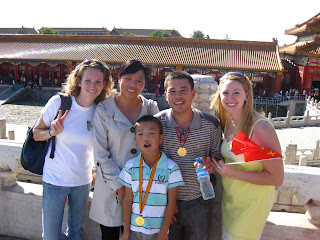 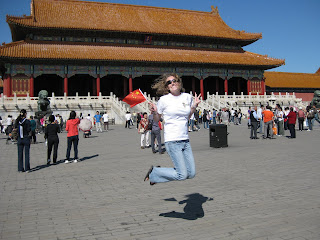 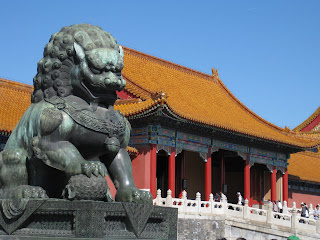 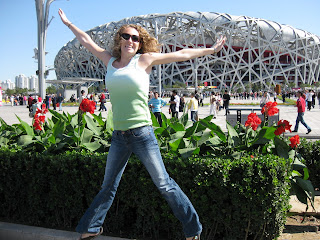 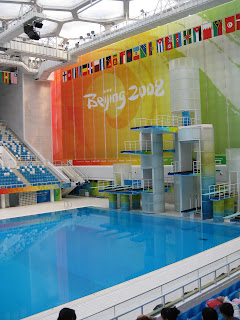 After the Park we went to the Llama Temple. As we were walking there we noticed all these shops selling big incense, and we were wondering why they were selling those. We found out once we got to the temple. You get incense, they have a flame to light them and then you kneel in front of every Buddha and bow three times and then give the incense to Buddha in this big pot. It was interesting to watch.

By the time we finished the Temple we still had a few hours to burn before the acrobatic show we got tickets for, so Whitney and I decided to go and get massages. We wanted to get full back massages, but the place we went to only did foot massages. So since we had been walking around all day anyway we figured a foot massage would be quite nice. Plus it was only 28 Yuan for an hour long foot massage, which is roughly $5. They first soaked our feet in this really hot milky stuff and gave us a mini back rub, then they gave us a really nice foot massage. At the end they asked us or I should say just mimed to us if we wanted something else, and pointed to something that said “heat therapy/foot cupping”. It was only like a dollar more, so we said why not. We didn’t know what to expect, but all of a sudden they brought out these glass cups and a giant flame! Whitney and I just looked at each other and laughed and said oh my gosh what are they going to do?! It wasn’t bad though, they just put the flame into the cup and stuck it on my foot, making it like a suction cup. It didn’t make my feet feel any different, it was just very odd. 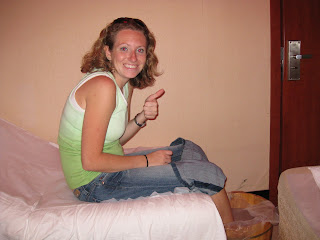 The acrobatic show we went to was really fun. We actually met some girls who were also English teachers in Korea and they also worked at an ECC. 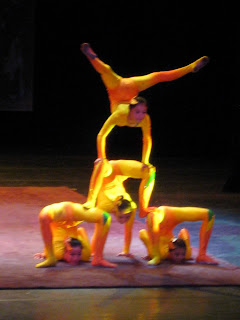 Monday – are last day in China. Alan, Katelyn, and Prairie came back from Shanghai and picked us up in the morning. We went back to the Silk Market and bought a few last minute things. We then went out to lunch, Alan took us to a restaurant so we could have the famous Beijing pecking duck. It was really good! You could even watch them cook it. They cooked them in this fire pit thing, head and all. Then they took them out, cut the head off, and sliced it up for you to eat. After lunch we went back to the lake, and this time rented a boat and went out on the water. It was really nice…and yet again, a gorgeous day. It was a perfect way to end our trip. After that Alan drove us to the airport to catch our plane home. By the time we got home it was really late…with the plane ride, the hour difference, and then the 4 hour bus ride home..it was around 2am when we got home. And we had to be at work at 9 the next morning. I had such a great time though. I would definitely go back if I get the chance. 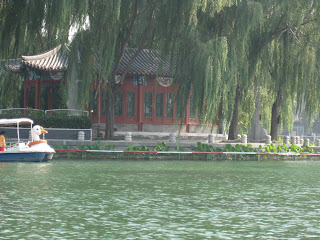 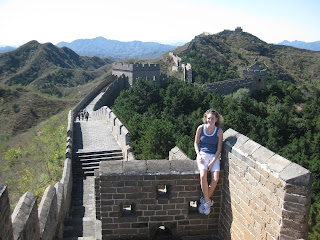 Alright, well sorry this blog was so long. Hope everyone is doing well! In other news my sister Lauren got engaged this week! :) Yay!
Posted by Caroline at 4:48 AM