Last week we had this “English Market” for the kinders. We set up little stores in each room. We had a fruit market, a vegetable market, a stationary store, a flea market, and a snack store (all real stuff). Each kid was given a little purse and some fake money. And they were allowed to buy things, using only English of course. They had to say things like “How much is this?” and “Can I have a discount please?” It was very cute. We actually had to have the kids memorize the “script” the week before. So I think the kids finally understood why they were memorizing those sentences, even though most of the kids didn’t even remember the lines. It was good though, and the kids had a lot of fun, especially since they were allowed to keep everything they bought.

This weekend was good. Went hiking on Saturday morning, enjoying the beautiful weather while it last. I know it’s going to start getting cold soon. Later on I went out to eat at “Kimbop Nara” with Whitney and Aaron. This is a great little place with good cheap Korean food, I usually eat the mondue, which are dumpling things, and also the tuna kimbop. Kimbop is rice with a few other veggies wrapped in seaweed…and you can get other things in it too, like tuna. :) That night Whitney and I tried to get everyone together to go bowling, but it ended up only being me, Whitney, Jake and Devon (2 other co-workers). It was a lot of fun. I love bowling. I would say I did pretty well too. One game I got 5 spares in a row. :) After bowling we decided to go to “Fish and Grill” and have some fruit flavored soju cocktails. They are so delicious. They’re just like fresh fruit smoothies with soju.

Today has been a pretty relaxed day. Just hung out in the apartment all morning/afternoon. Cleaning my room, catching up with a few things. At 4:00 Whitney and I went downtown and met Gena (one of the Kinder Korean teachers) and “Rebecca” (one of the secretaries at our school). We went and saw the movie “Fame”. It was really good. It’s funny because they play the American movies here with Korean subtitles. But there were some parts of the movie that were either slang words or English expressions, that the Koreans did not get at all, so sometimes Whitney and I would be the only ones in the movie theater laughing.

So..as far as TV goes, Korea plays American TV shows, but only a select few. They are all in English, just with Korean subtitles. The only shows they play are: CSI, House, Greys Anatomy, Oprah, Ugly Betty, Gossip Girl, Tyra, Project Runway, NCIS, and a few other of those crime shows. So, those are pretty much my only options. At least that’s all I’ve seen so far. And of course the Korean channels are always interesting too..they have lots of weird random shows. Although, they do play some pretty good American movies every now and then. Yesterday they played the Sex and the City movie! The commercials are the best. I could watch Korean commercials all day long. They crack me up. Here is one that they play all the time, it’s my favorite:

Korean class has been going well. I’m so excited that I know the Korean alphabet and that I can actually sound out and read signs around town. Although I can read the signs, I have no idea what it means. As for actual Korean words - I know the basics, hello and thank you. But I’m also learning a lot of random words. So far I know words such as: vomit, shoes, baby, pig, nosebleed, tree, beer, moon, candy… You know, the most essential words.

This week I only work till Wednesday and then I have a 5 day vacation for Chuseok (Korea’s Thanksgiving). I’m so excited about going to CHINA!!! 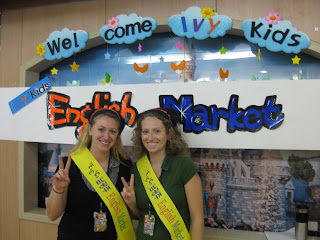 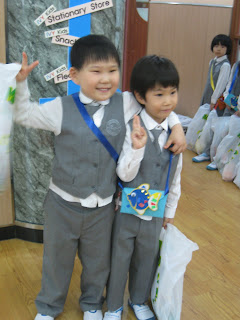