So this weekend has been pretty good. The week didn't start off so well though. On Tuesday, Whitney and I walked into school and checked our temperature (as we do every morning because Korea is a little paranoid of the Swine flu) and we both had a high temperature. Mine actually wasn't that bad..but I had a sore throat and could tell I was getting sick. So, we told one of the Korean teachers and she automatically called our boss lady and they decided that we should both go to the hospital. So our IT tech guy at the school drove us to the hospital and helped us with everything, he's a really nice guy, but he speaks hardly any English. At the hospital the nurse had us wear masks...which was quite funny - especially because I wore my glasses that day and everytime I took a deep breath or laughed my glasses would fog up. They are very fast at the hospital..like the longest we waited was probably about 7 minutes. We had a very broken English/Korean conversation with the doctor about our "illness" and from there he decided that we had many of the symptoms of swine flu..therefore we needed a swine flu test. (the first one at least..and if it came back positive then we had to take the second one). The nurse told us to go upstairs and we waited for a few minutes and at that time Tanya came (our "principal"/boss), and she can speak very good English. We took the swine flu test, which was just a little swab from the throat - it came back negative. The doctor brought us in again and this time we had Tanya there to translate for us. The doctor had about a 5 minute discussion with Tanya in Korean and then she turns to me and Whitney and says "Caroline you have the common cold and Whitney has tonsillitis" (which she knew that she had either that or strep, since she's had it before). From there we went across the steet and got some medicine from the pharmacy. I didn't think I was getting medicine, but apparently I was and I was kind of confused on why I was getting something for just a cold. I just went with it though. Once I got it, I took a look a the pills and on it said tylenol. Ha. Well...after all that, you would think that they would send us home..you know since we were sick and all. At least send Whitney home since she had tonsillitis, which is contagious...nope we went right back to school and continued teaching. All they wanted to know is that we didn't have swine flu. So, yea that was interesting.

On Saturday several of my coworkers and I went to Boseong to see the Green tea fields. It was about an hour and a half bus ride. Then we took another smaller bus to the actual fields, so we arrived there around 5 ish. It was so beautiful, it was quite a hike though. Once we were on top of the mountain it was a georgous view. It was a really good day, and I had a lot of fun hanging out with everybody, including two of the korean teachers who went with us. :) 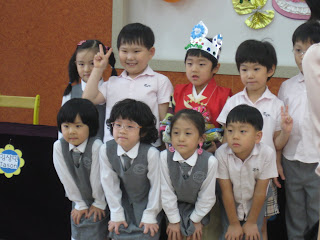 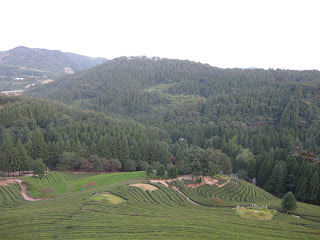 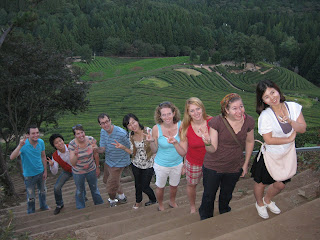 Everybody at the top.
Posted by Caroline at 5:55 AM