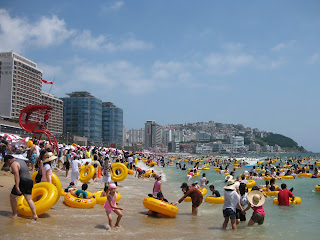 So, last weekend my roommate Whitney and I went to Busan. We had Friday off, so we figured we might as well take advantage of the 3 day weekend. Busan is a city about 3 hours west of where I live, it's known for its beaches. So on Friday we packed our backpacks and hopped on a bus. The buses are actually pretty nice. They have a cheap one and a more expensive one. We usually go on the cheap one for only 15,ooo won (which is roughly 13 dollars), but we decided to take the more expensive one (which is still cheap for only 22,000 won - about 20 dollars) because it was leaving at a better time. The nice bus has wider seats, foot rests, and you can lean your seat back far. So pretty much like first class. Both of the buses have TV's also. Anyways, once we got to Busan, we automatically got on the subway to head to our hostel. And oddly enough we met this korean guy, (who was helping us) who had just been in Orlando working at Disney for 6 months. He was so excited to find out that we were from Florida. He was also just visiting Busan, but lives in Seoul. So we exchanged facebook info, and now we have yet another friend in Seoul.

We got to the hostel and checked in. It was a little different from the hostel we stayed at in Seoul. And by that I mean it had signs saying it was a hostel. But it was still just this guy's house, which was on the roof. He had actual rooms though and a kitchen and a common room. He also had a dog :) Once we checked in and everything we decided to go check out the markets. So we got back on the subway and found the markets, which is a whole street of shops and little carts of people selling stuff. Tons of socks, shirts, jewelry, hats, food, fake purses, and lots of other random stuff. It was fun. For dinner we found a pizza hut! It was good, but it defiantly was not like pizza hut in the states. We ordered a potato pizza and when it came out it had everything on it! Potato, onions, peppers, sausage, peperoni (or i think it was just ham), bacon, corn (yes corn), and this weird white paste on top. It actually was not too bad, I was just not expecting that. It was really expensive too, most of the American food is pretty pricey here.

The next morning we went to Haeundae beach. This was the popular well known beach, where everyone in Korea goes during the summer. It was extremely crowded to say the least! When we got to the beach, we had to buy an umbrella (there is no room for you to just lay out your own towel somewhere). I think the guy was asking if we wanted to sunbathe and we said yes apparently and so he put us away from everyone else in a sunny area where we could lay out. Because koreans do not sunbathe, they don't want to look dark. We were told that Koreans don't want to be dark because that makes it look like they are lower class and working in the fields all day, so the whiter you are the higher the social class. But anyways, so we were the only ones not under an umbrella and away from everyone else..so we get stared at on a regular basis anyway, but this was just like putting us on display. The beach was sooo much fun though. The water was crazy crowded. I had never seen anything like it in florida. There weren't many waves so these boats would drive back and forth to make waves. So everyone was packed in the water and the waves would knock you into someone. The Koreans are so friendly though, they would just laugh and keep going. We actually met these other American guys who teach English in Seoul. One was from New York, so he talked our ears off for about 2 hours. We were supposed to meet up with them later that night but we never did.

After that beach, we got back on the subway and went to our hostel and took quick showers so we could go to the other beach which was just a short walk from the hostel. That beach was less crowded, but it was also later in the day. That one had a really pretty bridge over the water too, that lit up different colors at night. We walked along that beach for a while, took some pictures, and had a few Koreans come up and chat with us. It was fun just people watching and there were all sorts of mini concerts, dancing soju bottles (which was pretty funny), and different things along the water. Then we kinda just hung out on the beach all night and watched the bridge change colors, it was really relaxing.

Overall, it was just a nice weekend. I defiantly want to go back. 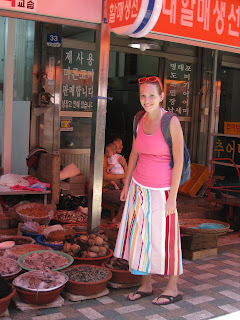 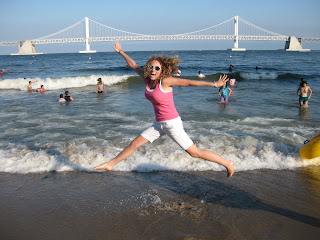 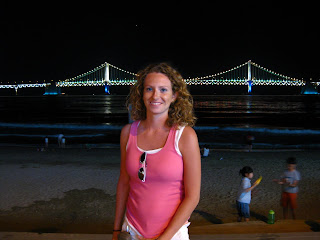 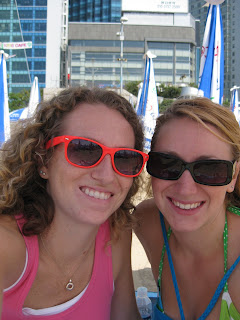