This week has been pretty good. Last weekend Whitney and I went hiking. (a popular thing to do in Korea..it's like a Korean past time) We realized that there was a hiking trail right behind our apartment complex. We pretty much live in the mountains. The hiking was fun, it was really just a bunch of steps up the mountain and then just a trail on top of the mountain. The view is pretty and they have these little work out stations with pull up bars, etc..and also these twisty turny things that you exercise on too. I'm defiantly going to try to start hiking more, since the mountain is right in my backyard. 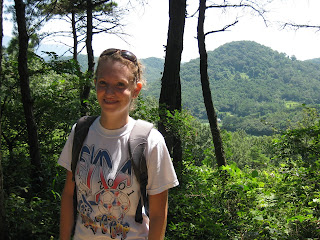 Saturday night we went to dinner with a lot of the other foreign teachers to a restaurant we've been to a few times. It's really good, but really spicy. We met the new kinder teachers who just got here, who are replacing the other two that we've been working with for a month. Yea, so there only 4 kinder teachers me and Whitney and the other two are leaving, so now we have 2 new teachers, and they are going to be asking us how to do everything...ha. We are pretty new too, and are still a little confused on everything. This will be interesting. So, anyways after dinner we went downtown and went to a few bars, then we went to this dog cafe. This was one of the strangest things. It was a place where they had about 15 dogs and a few cats all running around in this room with make-up on, some were dyed different colors and some were shaved in funny ways. And you could just play with the dogs! Apparently you could get coffee also. So we went there and played with the dogs just for a few minutes, I think you're supposed to pay, but we weren't there for very long, and the koreans didn't say anything when we left. It was fun, just very odd.

Sunday I went to church with Whitney and two other English teachers from our school. It was an English speaking church. There were about 7 Americans there and the rest were Koreans who attend the English service to help them learn English I guess. The church wasn't bad. I don't know if I'll go back though. The pastor really creeped me out. I can't really describe him, but he is just creepy and Whitney said the same exact thing. Everyone was really nice though, they had sandwiches afterwards, and they gave us both a loaf of bread. After church we walked around downtown for a while, and did some shopping. We also found the McDonalds in our town! :) And ate there of course. They have a few American resturaunts here....Outback, KFC, Burger King, Pizza Hut, McDonalds, Baskin Robins, Dunkin Donuts, Krispy Kreme, and thats about it I think. Some of its kinda expensive though - especially Pizza Hut. So, if I get too sick of Korean food I have a few places I can go :) I eat at school everyday though. I ate something today that looked and tasted like grass..it probably was seaweed..again.

Well, I get a break in October for 5 days and Whitney and I are trying to decide what we are going to do. I think we may go to China! :)
Posted by Caroline at 5:40 AM